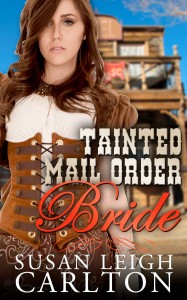 A wagon train of midwestern farmers is bound for California via the Oregon Trail when they are attacked by the Sioux. The train is wiped out except for one young woman who escapes into the nearby forest.

Wandering aimlessly in the woods, Cassie Jennings is found by a fur trapper. He has no plans to return to civilization until the trapping season is over in about nine months. When he returns to Laramie with Cassie as his captive, he is arrested and jailed. Cassie is allowed to stay with the local preacher and his wife.

Cassie, pregnant and despairing of a normal life, placed an ad in The Matrimonial News, hoping to find an understanding man that will marry her and her unborn child.

Rance Underwood is a young rancher whose parents were killed by an Indian raiding party wanting their cattle, lives alone on his ranch. He too placed an ad in The Matrimonial News. As luck would have it, they respond to each other’s ad. They exchange several letters and decide to reveal their names, previously known only by their ad numbers.

After Rance asked the preacher for help with his letter, the preacher realizes they have been corresponding with each other and brings them together. They meet and in total honesty, she tells Rance she is pregnant. Stunned, he says nothing and abruptly takes off, leaving Cassie in tears.

Back at the ranch, Rance realizes how rude he was and talks with Luke Hastings, his neighbor. He decides to go back to Laramie and make it right.

When he arrives in Laramie, he finds the trapper has been released and has kidnapped Cassie. Rance chases after them.

Find out if he is successful and follow them as their life together unfolds…
?