Prologue to Angie and the Farmer 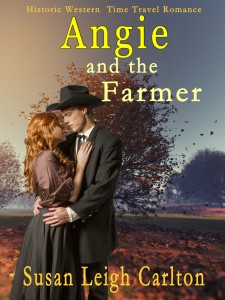 Prologue
Angie and the Farmer

Prologue
Haynes Falls, Oregon April, 2016…
Haynes Falls Mayor Wilton Chastain held the ceremonial silver shovel he would use to break ground for the badly needed new Meriwether Lewis High School.
“My friends, it is my great honor to signal the beginning of construction for Haynes Falls’ first new high school in nearly a century. This is a momentous occasion and I do this with great humility.”
He tried to push the shovel into the partially frozen ground with no success. He put his foot on the top of the silver-plated shovel and applied his considerable weight to the task, and managed to penetrate the frozen earth about three inches. He turned the shovel over and dispersed the dirt.
“Let the construction begin,” he pronounced in a sonorous voice. The eleven attendees dutifully clapped, and as a body, hurried to get out of the bone-chilling wind coming from the mountains.
The heavy equipment began excavations the next day, filling the air with a choking blue smoke from the huge diesel engines. At noon the next day, everything was halted.
“What do you mean stopped?” the bombastic mayor shouted at the project manager for the school.
“Mayor, we dug into a grave,” the engineer said.
“Whose grave? The environmental study didn’t show any cemeteries on the property.”
“I know, sir. But we broke into a grave.”
“Well, move it then and get on with the work.”
“It’s not that simple,” the engineer protested. “The gravesite is protected by law.”
“What law?” the mayor demanded.
“The Oregon Legislature passed OREG CODE ANN § 22-3-802 in 2011. I’ll read part of it; ‘preservation in place is the preferred policy for all human skeletal remains, burial sites, and burial material; and (f) notwithstanding any other provision of law, this part is the exclusive law governing the treatment of human skeletal remains, burial sites, and burial materials.’ It pretty well spells out our course of action, Mayor. We have to stop and get the state medical examiner involved. It’s not going to be quick or easy.”
“Get the City Attorney involved. It’s about time he earned his keep.”
“It’s going to cost a fortune for the heavy equipment just sitting there, not to mention the men.”
“That’s the construction company’s problem, not the city’s.”
“Their position is it’s our fault for not doing our due diligence on the impact survey.”
“Give that to the lawyer also. Do you have any good news for me?”
“Not at this time,” the project manager said.”
“I should have stayed where I was, then I wouldn’t have to put up with all of this crap,” the mayor replied.
The construction site was turned over to the Oregon State Medical Examiner. Two weeks later, he held a press conference. “We have determined the remains are those of a Caucasian female and have been in the ground for over ninety years, therefore, there will be no criminal actions regarding this case. I will be issuing a ruling of death by natural causes. I will now accept a few questions.”
“What happens now?” a reporter for the Haynes Falls Herald asked.
“We have invited the Oregon Preservation Society to participate in the next phase of the investigation, which will involve identification of the decedent.”

Two days later, KNHF’s Breaking News carried an article with the accusation the examiner’s office was stonewalling the media on developments at the gravesite. The State Examiner’s Office said they could not comment on an ongoing investigation.

Two days later…
“This just in,” a breathless street reporter announced on a Salem TV station. “KSAL News has just learned an iPhone was found in the mystery grave at a construction site in Haynes Falls. We are concealing the identity and voice of the source since they are not authorized to speak for the Examiner’s Office or the Preservation group.
“Our source informs us the iPhone and other items found at the site have been sent to Apple Labs for analysis in an attempt to identify the victim. We will continue to bring you updates as they become available.”
Three weeks passed…
KNHF Evening News Breaking News…
The mystery of the grave found at a construction site in Haynes Falls deepened today when it was learned the iPhone found in the unmarked grave on the site for the new Meriwether Lewis High School was registered in December, 2014 to a Miss Angela Thornton of Brevard, Missouri. Miss Thornton and her family were thought to have died in a flash flood when one of the Missouri River tributaries swept the family car away in 2015. The bodies of the parents were recovered but their daughter’s body was never discovered. A source in the Examiner’s Office revealed their investigation had determined the ground around the grave had not been disturbed in decades and the casket had not been opened prior to being pierced by the excavator.
“The source said a plea for relief from the City was granted, and construction can proceed, provided the remains are buried in the original location and the site preserved and protected.”