Not Quite a Mail Order Bride 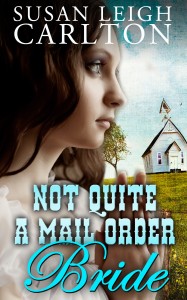 The story of the mail order brides from the old west started when the gold rush brought males over the Rocky Mountains to new mining communities. Only a very small number of prospectors really struck it rich, but a lot of young males stayed in the west, mining, ranching, farming, hunting or opening companies. As towns began to grow, these males wanted wives to create households, and to develop far more stable, lasting communities.

In the western territories, males outnumbered the ladies dramatically, sometimes by as many as nine to one. The obvious answer to the problem was to bring single ladies in the east, westward, prepared to make a new life.

Just as the gold rush produced a disproportionate ratio of males to females in the west at the end of the 1860s, the Civil War along with the migration of people to the west, led to a similar ratio of women to men in the eastern states. There had been a very limited number of careers open to women, and those who didn’t marry early faced not only the loneliness and social stigma of spinsterhood, but the prospect of poverty. All too often, the opportunity to move west, make a life and be part of a household was something some women had been prepared to sacrifice for.
Laramie, Wyoming was a western town with a dearth of females when compared to the number of eligible bachelors.

She came to Laramie as a mail order bride for Will Hastings. As she stepped from the stagecoach, she was grabbed by a drunken cowboy. Her husband-to-be tried to intervene and was gunned down in front of her.

Left with $73 and her husband-to-be face down and lifeless in the dirt street of Laramie, she was now faced with a choice of returning to Philadelphia and a hopeless life there or that of a whore working above the saloon in Laramie, when a third choice presented itself. The twin brother of her intended offered to take her as his bride.

Did she dare take the chance with this stranger? With no money and no prospects, Clara had no choice, so she accepted his proposal, married and went home with Luke Hastings.