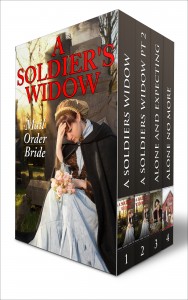 A four book anthology containing the contents of the first four books in the highly popular A Soldier’s Widow Series. The first two books are serials and should be read in order. The last two contain some continuations of characters from Book 1 and Book 2 but are standalone.
A Soldier’s Widow: Book 1
This is the story of Miriam Ponder of Yorkville, South Carolina. Miriam became a widow on November 24, 1863, when her husband, Hiram was killed during the Battle of Missionary Ridge. His name never appeared on the casualty lists and she was unaware of his death until a few months after the end of the war.
It is also the story of Tom Cannon, who was shot during the same battle. Tom was a member of the Union forces attacking the Confederate Army on Missionary Ridge. He was wounded, but survived.
The story tells of the loneliness of each of them, and the steps they take to end their loneliness.

A Soldier’s Widow: Book 2
The conclusion of a two-part western historic romance about a war widow and her desperate search for happiness and security. Miriam Ponder traveled three fourths of the way across the country to become a mail order bride, only to find her prospective groom fought in the same battle that took her husband but he was on the other side.
Through compassion and understanding they overcome this hurdle only to be confronted with one of the worst things that can happen to a couple, compounded by an incredible act of insensitivity. The marriage is badly broken. Can it be saved by close and caring friends? Read A Soldier’s Widow: Part 2.

Alone and Expecting
The sequel to the popular A Soldier’s Widow. If you like sweet, tender, western romance, this is the book you’ve been waiting for.
Cindy Britton was twenty-three when her husband was killed in the Battle of Gettysburg. The war had taken its toll on men her age and by her twenty-seventh birthday her mother began inviting men her father’s age to come courting. She refused and moved her children to her late husband’s farm.
One of the older men paid her father for her hand. He kidnapped her from where she was living and took her to the fat merchant to be married.
Whit Goodson is a lonely ranch foreman in Montana, and is advertising for a wife. Read this compelling story about what fate has in store for this couple.

Alone No More
This is a sweet, western romance with Christian overtones; complete with no cliffhangers and does not require reading of the three previous stories to enjoy it. There is a minimum of sexual activity between husband and wife, and no explicit descriptions and no vulgarity.
The story is set in the 1870 time period on a ranch outside Helena, Montana. Cindy Britton was a Civil War widow who found a new love with Whit Goodson through a matrimonial newspaper, and moved to the Box C Ranch. The story line is about the fortunes and misfortunes of their family that eventually included four children.
An encounter with cattle rustlers left Whit in a hospital in Missoula with gunshot wound in the back that took away the use of his legs. He falls into a level of despair that threatens their marriage as well as nearly costing them their lives.
Life on the frontier of Montana was difficult enough without the misfortune that strikes just when everything seems to be coming up roses for them. Can their marriage take this hit and survive?
If you like happy ever after stories, strong heroines, and vulnerable heroes, where the bedroom door is kept closed, this might be the answer for you.
Click here to purchase”A Soldier’s Widow”