Alone and Expecting: A Historical Romance is live! 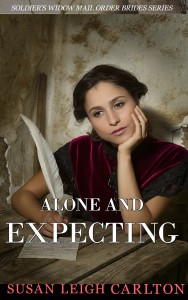 It’s here! The sequel to the popular A Soldier’s Widow. If you like sweet, tender, western romance, this is the book you’ve been waiting for.
Cindy Britton was twenty-three when her husband was killed in the Battle of Gettysburg. The war had taken its toll on men her age and by her twenty-seventh birthday her mother began inviting men her father’s age to come courting. She refused and moved her children to her late husband’s farm.
One of the older men paid her father for her hand. He kidnapped her from where she was living and took her to the fat merchant to be married.
To get “Alone and Expecting” now Click here